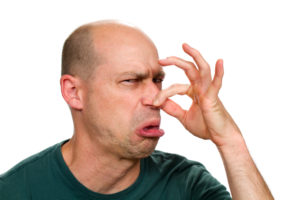 If you smell something unpleasant in your Abernathy, Texas, home, your HVAC system could be the cause. Stinky HVAC odors often indicate the presence of a more serious problem within the system or ductwork. Take a look at some of the most concerning HVAC odors that you might smell.

Unless you actually have eggs that have gone bad in your home, the smell of rotten eggs often comes from natural gas. This odor is especially worrisome because it can indicate that your HVAC system has a gas leak, which can put your family in danger. If you smell that familiar natural gas odor, shut off power to your HVAC system and contact your gas company as soon as you can. Next, you’ll need to have an HVAC technician take a look.

If you smell wires burning, your system may be having an electrical issue that needs to be resolved. An electrical odor can occur if the motor inside the heating or cooling system is burning out, or it can happen when the wiring is going bad. Any type of electrical problem can increase the risk of fire, so get it checked out as soon as possible.

A musty odor in the air usually means you have moisture somewhere in your HVAC unit. This can happen when water isn’t draining properly from the condensation line when your air conditioner is running. You could have a clog in the drainage line. Moisture in the ductwork can also cause the musty odor, so if the condensation line isn’t clogged, having your ducts professionally cleaned may resolve the issue.

Many heating systems rely on gas or oil to operate, but you shouldn’t smell it unless something is wrong. If you catch a whiff of oil or gas in your home, the unit may be leaking or you could have a clogged burner. A leak can usually be resolved by tightening a valve, but a clogged burner is potentially dangerous, so get it checked by an HVAC expert.

At Bruce Thorton Air Conditioning, our HVAC technicians can diagnose the cause of worrisome HVAC odors, so give us a call at 806-589-1014.

We are proud to offer service to all of Lubbock, TX and surrounding areas, including:

With more than 45 years’ experience providing heating, ventilation and air conditioning services for residential and commercial customers, we at Bruce Thornton Air Conditioning are proud to be the South Plains TX area’s comfort specialists. We specialize in system replacement, preventive maintenance and repair, all with the goal of keeping your heating, cooling, refrigeration and plumbing systems functioning at maximum efficiency.

We are your one-stop provider.

We are always at your service.

We do up-front pricing.

We stand behind our work.

What Customers Love About Us

Nsncy Alvarado
00:11 01 Jan 21
Shower faucets working good. Had some faucet tubing replaced and faucet accessories also. I am pleased with Raul and... Sisco. Thanks BTACread more

John W
14:52 31 Dec 20
Very efficient and capable. They are very pro customer service. All projects were performed when scheduled and cleanup... was excellent. I will use BTAC again.read more

Christy Jordan
22:05 22 Dec 20
Raul M. and his associate Cisco were called to address a drain line clog. They were very attentive and addressed all of... mine and my grandmother's concerns. Additionally, we made the call and they were on their way out here within the hour. Between the customer service and ability to make repairs, we are highly satisfied. Kudos to BTAC on your company as a whole!read more

Cathy Morton
01:07 07 Nov 20
We cannot thank Frank and his crew enough for taking care of us today. We had been without gas for 6 days waiting to... have a new line installed. We talked to Frank yesterday and they were here at 8:30 this morning. They were available all day until the line was installed, City code officer was here and Atmos turned the gas back on. Then Frank made sure all was working well. We certainly will recommend BTAC to all we know! Thank you!read more

Douglas Mires
21:29 14 Oct 20
Prompt, clean, efficient, friendly and kept me informed on what he was doing.

S. Wayne Osborne
19:32 08 Oct 20
BTAC installed a mini split heat/ac system in my workshop. I am initially very pleased with their sales and... installation, and the system they installed. The Daitec system is built in Houston so it is a made in USA product. It was expensive but should prove to be worth the price.read more

Angela Dixon
15:59 09 Sep 20
Confused how this company has so many stars and yet, we have had nothing issues. Salesman came out and told us how to... fix our issues. Suggested some changes in duct work would improve the flow of air to far bedroom and the whole house. His words were "it will feel like a meat locker". That never happened. (But come on, we live in Texas, "meat locker" was a little extreme and our exceptions weren't that high!! We at lest wanted the house to stay at 70 unlike 75-80+.) We also knew the unit was old and we expected to replace the whole unit. He said we didn't need one and doing the duct work would be enough to improve the cold air.After the work was done, we realized NO air was flowing in one of our sons room. The room was RIGHT by the ac unit. Had to call them and wait 3 plus days, for them to attach the air duct to his room. (because they didn't do it the first time, even AFTER walking through the house to double check everything). They had to come adjust/fix things three times. They put the wrong size return, realized they needed to add another vent, and so on...Needless to say NOTHING has changed expect the $3,000ish dollars missing from our account. House was still as hot as it was before they came. To be clear, money wasn't an issue. We wanted it cool in the house.Called another a/c place to see what they would say. Wanted to know if we were expecting something impossible...or what other suggestions they had because we were getting nowhere with BTAC. The other company gave us several suggestions and change a few things and that improved the air instantly.Contacted Bruce Thornton after speaking with the other company, to let them know what was said to us, to give them the opportunity to fix mistakes, give suggestions, or anything. We expected more pride in their work. Not for them to view us complaining because we wanted a discount on the bill. Which was not the case.It makes me sad that we wasted money that changed nothing. We should have got a second opinion, or maybe done more research before we gave them the go ahead. We were disappointed they weren't willing to fix mistakes and or even give more options to fix the a/c. It felt like they got their money and they were done with us. We were willing to pay for a new a/c unit, but were told we didn't need one, we needed to get the duct work changed. That is why it is even more upsetting, because we were going to give them more business, but because of this, we moved to another company.It is always good to get a second opinion. That is the lesson we learned through all this.read more

adam castro
14:47 05 Aug 20
Great Customer Service from start to finish. From getting pre approved by Brian which he was great and helpful in... making the process smooth he took care of me throughout. Then on the day of installation showed up 20 minutes early which was a plus. The gentleman that did the installation were fantastic and knowledgeable and helpful and very friendly. Ivan, Michael, Esai, and Gabriel were great. Ivan was awesome he worked very hard and got the job done. They were all great thanks for everything! I highly recommend them!read more

Jen S
16:39 24 Jun 20
6/24/2020I had a sales person come out and he was friendly professional and knew what he was talking about.This... company is great they were one of the only companies to come and help with a new ac.read more

Lana Lane
14:49 26 May 20
BTAC has been professional, informative and has taken care of all our chiller issues. Joe and Louis are the Best!!

Erin W
16:52 18 May 20
Louis was so helpful and got our air back up and running in no time. When I asked about a special system tune up for... nurses they did that and didn’t charge me anything!!!! We will certainly call you again!!!! Thank you so much!read more

Leah Beikmann
23:42 04 May 20
Just wow!!! I work at the hospital and they came out and did a free evaluation of my AC unit, inside and out. We had... been told before by other companies that the whole unit needed replacing but a great technician from Bruce Thornton AC told us we just needed to replace the capacitor! $130 instead of 5k! So worth having them out here to take a look. The technician also rewired something in my AC unit inside (sorry I don’t know technical words for AC units lol) that makes it turn on faster (a couple seconds versus a few minutes). I was very grateful for the very professional service I received, both on the phone with the lady who I made my appointment with, and the technician who really saved me a buck! They didn’t try to up sell me on something I didn’t need, they just let me know what I needed to keep my AC running. I highly recommend using them for your AC needs especially with summer coming up!read more
Next Reviews

Amana is a registered trademark of Maytag Corporation or its related companies and is used under license to Goodman Company, L.P., Houston, TX. All rights reserved.